I am a hacker.

The book Patterns of Enterprise Application Architecture (PoEAA) laid the blueprints for Rails’ architecture. When choosing which enterprise design patterns to encode into the framework, Rails picked, to name a few, Active Record, Template View, Application Controller, etc. By covering these patterns with a sweet coating of convention-over-configuration, Rails simplifies pattern analysis a lot.

These design assumptions were absolutely pragmatic for the type of applications that Rails was targeting at. However, as applications growing more and more complex, developers are starting to realize these default architectural patterns may not scale very well. Typically, four main areas are overloaded in an enterprise application:

To understand these problems better as well as to figure out possible solutions, I would like to walk you through some enterprise patterns from the same book that Rails’ architecture heavily bases upon.

Note that the patterns I am mentioning here will benefit more for complex applications, for example, an e-commerce web application selling digital goods. There’s clearly some overhead to use these patterns for simple projects where the default Rails patterns shine. Most importantly, you should only apply these patterns where they make sense. I am a strong believer in contextual solution and these patterns are definitely not the only way to go.

Data Mapper is a layer that transfers data between objects and a database. It typically creates Domain Model objects by populating their attributes from the database.

Assuming we are building an e-commerce platform, we get a store object by going through the store mapper which connects to the database:

Here is Martin Fowler on the choice of Active Record or Data Mapper for Domain Model:

An OO domain model will often look similar to a database model, yet it will still have a lot of differences. A Domain Model mingles data and process, has multivalued attributes and a complex web of associations, and uses inheritance.

In an enterprise Rails application, it’s not rare to see complex domain models stuffed with associations, validations, scopes and business logics. It has become a growing pain to deal with such “fat models”. We need to separate the database concerns out into a new dedicated layer: the data mappers. However, as far as I know, there’s no ORM in Ruby giving us such separation yet, although it’s been said the upcoming 2.0 release of the data_mapper gem will fully implement the Data Mapper pattern. Before we are able to consume the new data_mapper gem, is there a way to mitigate existing overloaded Rails models? Besides, switching an ORM for existing code is not effortless.

[Updated 01/10 2012] Piotr Solnica from the data_mapper gem made an official announcement saying they are actively working on Data Mapper 2.0. Announcement goes here.

As a compromised solution, I would extract database related logic for each ActiveRecord::Base model (e.g., validations and scopes) out into a module and then mix it in:

Layering is one of the most common techniques to break apart a complex software system. The higher layer uses service defined by the lower layer, but the lower layer is unaware of the higher layer. Each layer usually hides its lower layers from the layers above. A Rails project is typically divided into three layers:

It’s not difficult to understand the Data Mapper pattern is an effort to break down #3 into another layer to lower the complexity of models. However, in the context of enterprise application, models are still overwhelmed by complicated business logic. As Fowler pointed out, business logic can be further divided into “domain logic” and “application logic”, and Service Layer is a pattern to encapsulate model’s “application logic” by establishing a boundary where the presentation layers interact with the application:

… Service Layer is a pattern for organization business logic. Many Designers, including me, like to divide “business logic” into two kinds: “domain logic”, having to do purely with the problem domain (such as strategies for calculating revenue recognition on a contract), and “application logic”, having to do with application responsibilities [Cockburn UC] (such as notifying contract administrators, and integrated applications, of revenue recognition calculations). Application logic is sometimes referred to as “workflow logic”, although different people have different interpretations of “workflow”.

He also pointed out, Service Layer is a good fit for coordinating operations among multiple models, as well as for talking to multiple presentation layers:

The benefit of Service Layer is that it defines a common set of application operations available to many kinds of clients and it coordinates an application’s response in each operation. …

The easier question to answer is probably when not to use it. You probably don’t need a Service Layer if your application’s business logic will only have one kind of client - say, a user interface - and its use case responses don’t involve multiple transactional resources.

To translate this into a code example, let’s assume in an e-commerce platform, we need to email monthly sells report to the store owner. In this example, StoreService acts as a coordinator of multiple models for the “mailing sells report” workflow:

It’s not uncommon to present multiple models in a view. Most importantly, not all attributes of a model are needed for a certain presentation. In a complex system where there are lots of screens, views become a very busy place for extracting state and behavior from models. The Presentation Model comes to ease the pain:

As an example, let’s build a view for the scenario “creating a store for a user”:

In the example, we wrap two models (Store and User) into a presenter and extract only the attributes needed (Store#name and User#email) for the “create store” screen. To summarize this pattern, I would like to once again consult Fowler:

Presentation Model is a pattern that pulls presentation behavior from a view. … It’s useful for allowing you to test without the UI, support for some form of multiple view and a separation of concerns which may make it easier to develop the user interface.

… Presentation Model allows you to write logic that is completely independent of the views used for display. You also do not need to rely on the view to store state. …

Rails comes with a neat templating system that allows you to quickly create dynamic pages. However, this Template View pattern has drawbacks as Fowler pointed out, especially in a situation where the view is very complex:

… the common implementations make it too easy to put complicated logic in the page, thus making it hard to maintain, particularly by nonprogrammers. You need good discipline to keep the page simple and display oriented, putting logic in the helper. …

What’s worse, if the display of a view is based on conditions, for example in a multi-appearance application, you will find logic that determines which template to render leaked into many places in views or controllers. Again, this is fine for a simple Rails application. But it becomes unmanageable as the application growing more complex.

Let’s think about an example: an e-commerce platform supports multiple stores and each store has its own storefront to display a product. It’s common to see the following solution:

The determination logic for displaying a product based on store is leaked into the product partial. Apparently, to build the whole multi-appearance application, this approach does not scale. Thankfully, Fowler has something good for us - the Two Step View pattern:

… You may also want to make global changes to the appearance of the site easily, but common approaches using Template View or Transform View make this difficult because presentation decisions are often duplicated across multiple pages or transform modules. A global change can force you to change several files. 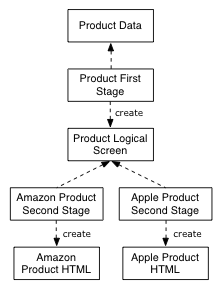 Note that in the implementation, a gem called cells is used to help define logical presentation. The cells gem is very helpful in this respect although it was originally designed for other purposes.

For the logical presentation, we define it to display name, description, price and reviews of a product for every store:

We then define three strategies (ProductCell, Amazon::ProductCell, and Apple::ProductCell) to convert the logical presentation to different HTML. We make use of cells’ strategy builder to return strategy class based on current store in session:

The default enterprise design patterns encoded into Rails are perfect matches for small/medium size projects. They are light weight and easy to understand. However, as the application growing more mature, these patterns do not scale well due to layers taking too much responsibility. That said, a “fat” layer need to be broken into smaller ones:

In return for breaking apart a system into smaller layers, each layer becomes easier to maintain, reuse, test and scale.

Last but not least, I would like to thank Martin Fowler for his awesome book and would love to hear any feedback for you.

You May Also Enjoy

Goup (pronounced Go Up) is an elegant solution to install Go and manage Go versions.

Upterm is an open-sourced solution for sharing terminal sessions instantly over the public internet via SSH tunnels. It is good for

My Lightening Talk On Godzilla At GopherCon 2017

I gave a lightening talk on Godzilla at GopherCon 2017. Enjoy :-)

My Lightening Talk At GopherCon 2015